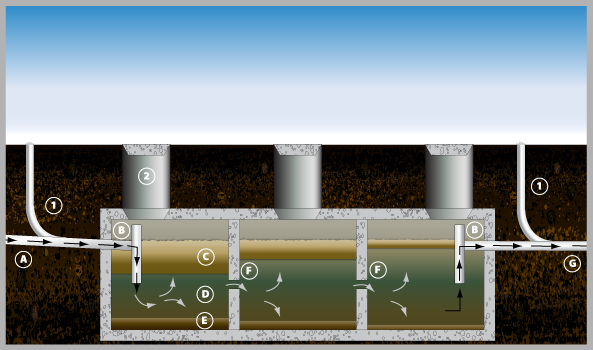 Aardvark Waste Services will completely clean your grease trap, no sludge left behind.

A grease trap (also known as grease interceptor, grease recovery device and grease converter) is a plumbing device (a type of trap) designed to intercept most greases and solids before they enter a wastewater disposal system. Large amounts of oil from food preparation in restaurants can overwhelm a septic tank or treatment facility, releasing untreated sewage into the environment. High-viscosity fats and cooking grease such as lard solidify when cooled, and can combine with other disposed solids to block drain pipes.

Grease traps reduce the amount of fats, oils and greases (FOGs) that enter sewers. They are boxes within the drain run that flows between the sinks in a kitchen to the sewer system. They only have kitchen waste water flowing through them, and do not serve any other drainage system, such as toilets. They can be made from many different materials, such as stainless steel, plastics, concrete & cast iron. They range from 5 gallons up to 3000 gallons and larger. They can be located above ground, below ground, inside the kitchen or outside the building.

When the outflow from the kitchen sink enters the grease trap, the solid food particles sink to the bottom, while lighter grease and oil floats to the top. The relatively grease-free water is then fed into the normal septic system. The food solids at the bottom and floating oil and grease must be periodically removed in a manner similar to septic tank pumping. A grease trap is not a food disposal unit. Unfinished food must be scraped into the garbage or food recycling bin. Milkshakes, gravy, sauces and food solids must be scraped off dishes before entering the sink or dishwasher.

To maintain some degree of efficiency, there has been a trend to specify larger traps. Unfortunately, providing a large tank for the effluent to stand also means that food waste has time to settle to the bottom of the tank, reducing available volume and adding to clean-out problems. Also, rotting food contained within an interceptor breaks down, producing toxic waste (such as sulfur gases) - hydrogen sulfide combines with the water present to create sulfuric acid. This attacks mild steel and concrete materials, resulting in "rot out". In most cases, multiple interceptors in series will separate grease much better.

We Will Call You

Thank you! Your submission has been received!
Oops! Something went wrong while submitting the form.
© 2009 - 2017 Aardvark Waste Services. All Rights Reserved.